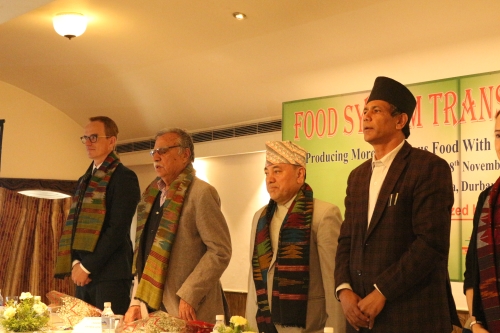 The program was chaired by Mr. Khem Bahadur Pathak, chairperson of Nepal Agriculture Co-operative Central Federation Limited (NACCFL) and Sana Kishan Bikas Laghubitta Bittiye Sanstha (SKBLBS). While Dr. Yubak Dhoj G.C, secretary of Ministry of Agriculture and Livestock Development, was the chief guest in the program. The ceremony was based on three major agendas such as Nutrition, Environment and Social Inclusion.

At sharp 9:30 a.m. the program was started with a meaningful and welcome speech by Ms. Meena Pokharel (Deputy General Manager). 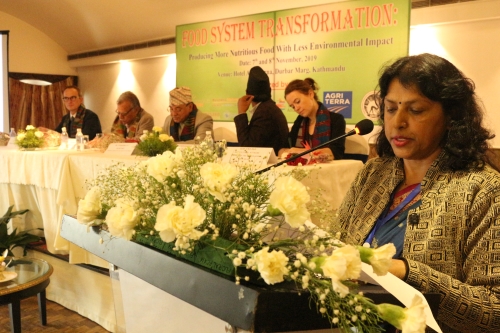 Dr. Yubak Dhoj G.C, secretary of Ministry of Agriculture and Livestock Development inaugurated the ceremony by lighting the candle. After that, all guests and participants stood up to sing national anthem. Then, Mr. Diwakar Rupakheti introduced NACCFL in brief and described about its work and contributions.

After opening ceremony, Mr. Ido Verhagen took the stage. He then briefly introduced about the objectives of the (FST) program. He delivered a small speech on what kind of challenges have to face and what needs to be changed during FST program.

And then Ms. Ilse van de Bilj (Agricutural Attache, Embassy of Netherland, Delhi) was called on the stage. She spoke about the role of the Netherland in the global food system. 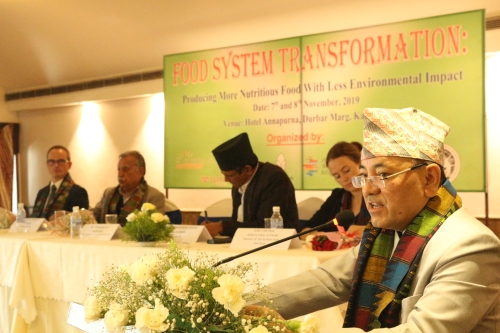 The chief guest of the day Dr. Yubak Dhoj G.C, was then called on the stage. He said, "Government will focus on producing nutritious agri food without effecting the environment ". Also he added, In Nepal “death ratio of people who died of malnutrition is multiple times higher than people who died due to lack of food"

Time 11:00 a.m. to 12 p.m. was given to the farmers for their introduction, mentioning their background, what do they farm and their thoughts upon the topics related. At 12:00 p.m. it was time for lunch.

At 13:00 p.m. the program resumed with a group work in 'World Café Style' in which three major aspects 'nutritious diets', 'sustainable production' and 'social inclusion' were discussed. This group work was supposed to explore farmers' experiences, look into their hopes/concerns for the future, factors that enables or worries them, their opinion on changes in future if they think about those factors and what they have been already doing that attributes for FST. This session lasted for one and half hour. At 14:30 p.m. it was called off for tea break. 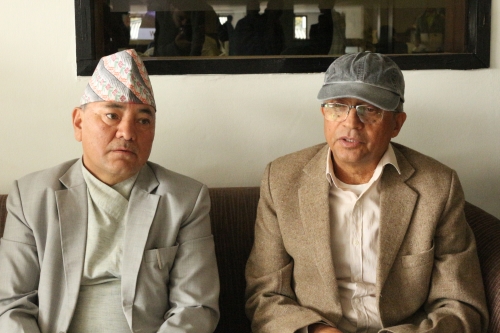 Next session got started at 14:45 p.m. with the same procedure, group work. In this session, the farmers were asked about the materials from the past session. They were encouraged to focus on the companies they sell or buy to. They were asked how those companies are enabling their production and also about the good relationship would look like with the company. Time 13:45 to 16:00 was spare as a small break.

Time 16:00 to 16: 45 p.m. was spent by building the agendas for 8th Nov. The agenda was to tell the farmers' expectation from the company. And each group of three or more were given a chance to raise three main points or questions with the company. At 16:45 the facilitator wrapped up the first day.

The second day of Food System Transformation (FST) program was started at 9:00 a.m. Mr. Gerda Verburg  Assistant Secretary General, SUN Movement Coordinator, UN took off the ceremony with the descriptions of challenges in relation to food system transformation, role of Sun Global Gathering and the importance of farmers. Then, Ms. Dianne Waldorf (Director Corporate Operations) briefly explained the role of private sector in this process.

At 9:30 Mr. Ido Verhagen gave the introduction to the World Benchmarking Alliance (WBA) and access to seeds index to outline how benchmarks encourage companies to better serve the interest of farmers to achieve a sustainable food future. Time 10:00 to 11:00 a.m. the company participants introduced themselves to larger group and the facilitator introduced the farmers. It was tend to explain how all are related to one another on the chain value. At 11:00 till 11:50 a.m. the facilitator and nominated farmer discussed about the main points of previous day. The next session resumed at 13:00 p.m. The session went on with a group work combining farmers and companies. The farmers and companies participants were combined in groups and they had to discuss the main points and questions presented before lunch. The companies had to respond and input on what do they agree and disagree on. 20 minutes were provided to each group and then each group had to summarize back to main group. 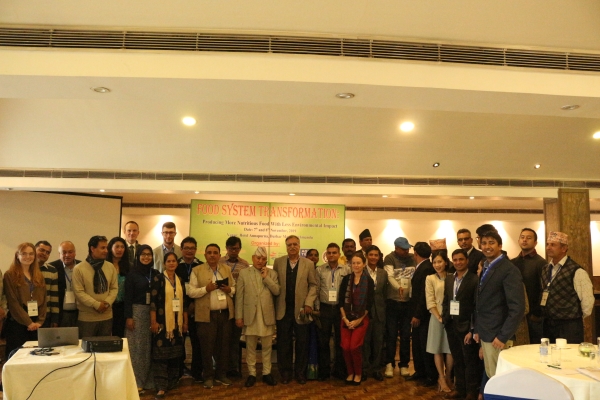 After the group discussion, it was break time at 14:30 to 14: 45. Then at 14:45 again participants were divided and formed into groups. This time these groups had to discuss on understanding of how companies and farmers come together. The session lasted for one hour and 15 minutes. Around 16:00 to 17:00 p.m. program closing ceremony was held. The facilitator had to get few participants to succinctly summarize what they not from workshop and it was the end of the program.

ToT on Cooperative Management and Performance

ToT on Cooperative Management and Performance was organized by NACCFL with the support of Food and Agriculture Organization of The United Nations form 2 to 5 May, 2018 at Lalitpur, Nepal. The ToT was provide to the Board members, Account committee members, Education Committee members, all the provincial level coordinators and staff of NACCFL. The Main objectives of the training was to upgrade the knowledge and ability of the existing trainers and cooperative members and to introduce good practices on cooperative management and performance.

With the support of CECI, a three days of trining on Gender Equality and Social Inclusion(GESI) was organized 4 to 6 March, 2018 at SAP Falcha, Babarmahal, Kathmandu. The training  mainly focus on acknowledgement  of  GESI terms, present and previous status of GESI and inclusion of GESI concept in proposal writing among the board members and staff of NACCFL.

The voice for youth involvement in cooperatives is in height. However, the ground reality is possibly its reversal. For the adaptability of its reality, the top-to-bottom approach i.e. policy to tangible implementation plan is desirable. From this perspective the emergence of forming youth committee in all central level federation is deemed necessary which could contribute to the national policy to make mandatory provision of youth involvement in cooperatives. For the furthering step, the inception plan is necessary and this workshop believes to be a contributing step to draft the youth friendly policy. Thus the workshop will be the steppingstone to make all the youth related forums refreshed and will energized for their further plan. The workshop is also believed to put forward possible intervention of cooperative youth to contribute in the 2030 agendas of UN SDGs.